For the last several months I have been reading that Brussels sprouts have become trendy among food aficionados.  For once I'm out there with the trendsetters!  I don't think I ever ate Brussels sprouts until five years ago, but since then it has rocketed to the top of my list.

Since discovering that I liked the little darlings, I most often cooked them by slicing them in half down the axis and sauteeing them.  Often I would add some white wine to the pan after the cut halves were browned, then cover the pan and let them simmer for a bit. 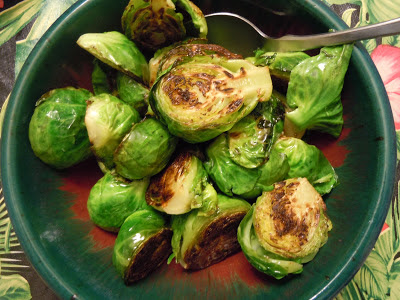 
But recently I tried a new method that I think will become my new default: slicing them a bit less than a quarter-inch thick.  Because they're thinner, they cook faster and don't need the additional simmer time, or the white wine.  I do think they benefit from a bit of acid, so have taken to squeezing lemon over the top when they hit the plate. 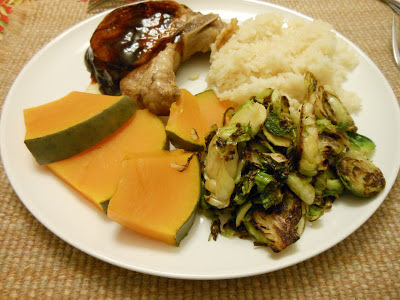 
We had some people over for dinner before Christmas and I thought why not be trendy and serve Brussels sprouts.  To my amazement my fashionable menu was met with emotions ranging from guarded neutrality to outright disapproval.  One wife proclaimed, "If you can get my husband to eat Brussels sprouts it will be a miracle!"  The guests helped themselves to teaspoonfuls and politely declined seconds.

I guess you have to choose your audience carefully before you exhibit your trendsetting credentials.  I am pleased to report that everybody loved the pot roast and gravy, a big trend from the 1930s.

Posted by Kathleen Loomis at 9:37 PM