Some people like sausage, some like scrapple, those often delicious, often intimidating mixtures of unidentifiable ingredients where you're probably better off not knowing exactly what you're eating.  I love mincemeat, which in England just means (hamburger) but in the US means a sweet melange that is most often found in pies.

When I was a kid I remember mince pie as standard fare (i.e. you could buy it at the store if you didn't feel like baking) although maybe my memory is wrong.  Today it seems to be an exotic relic prepared and eaten only by aficionados.  Of which I am one.

I hadn't baked a mince pie in many years for one reason or another -- too rich, too many desserts on the menu already, people wanted pumpkin, etc.  But as I was taking requests for Thanksgiving dinner my son mentioned mince pie and that seemed like a wonderful idea.  My husband, who loves to poke around in the back of cupboards and remind me of all the goodies I bought ten years ago and haven't served yet, found not one but two little boxes of mincemeat and delivered them with a flourish.  "These are probably so old we can't eat them any more," he announced, in terms that were guaranteed to make me take up the challenge. 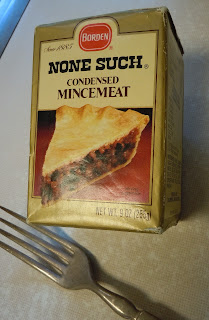 So how old were they?  I don't know.  They looked a little beat-up, as might be expected from having been in the back of the cupboard for a decade.  They didn't use the nutritional labeling format we're familiar with now, so several years at the very least.  I know they were less than 18 years old, because the label said copyright 1992.   But I thought mincemeat is probably similar to fruitcake (which I also love) in that its mystery ingredients probably include some industrial-strength preservative.  I forged ahead.

The Thanksgiving pie was wonderful, and nobody died from old age or botulism, so yesterday I pulled out the second box of mincemeat and made another pie for Christmas. 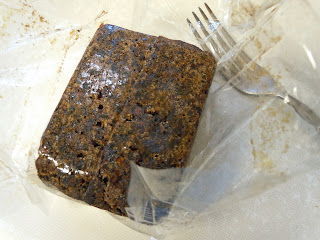 If you didn't love mincemeat in advance, you would never proceed past the opened box (much like the old story marveling about the first person to eat an oyster).  It reveals a cellophane-wrapped brick of dark brown composite that smells glorious but resists arrest. 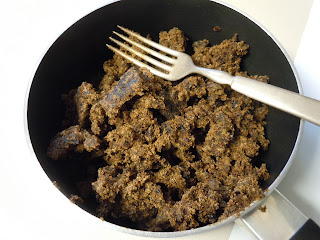 I don't recall the texture of a fresh box of mincemeat, but the texture of my box was dense and a bit sticky.  The package said to "finely crumble" the stuff but I used a fork and plenty of elbow grease to break it into bits, then added water and brought it to a boil. 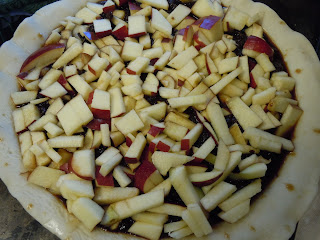 You could make a pie with just mincemeat (although that would require more than the single package I had left) but I have always added apples to cut the richness just a bit.  This pie required two big apples to fill it snugly.  I didn't bother mixing, just layered the apples and mincemeat. 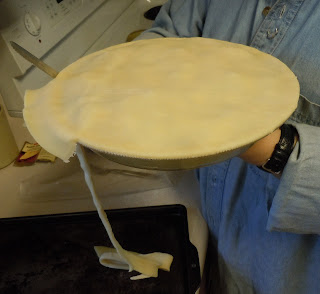 Now comes the part where I channel my grandmothers -- the official way to trim piecrusts is to heft the pie in your left hand and wield the knife with your right, cutting downward as you twirl the pie around.  Yesterday I opted to seal the crusts by pressing them together with the tines of a fork, but meanwhile I was watching the movie of my grandmother pinching the crust into raised zigzags with her elegant fingertips.  And finally you must cut a flowing tree shape into the top crust so the steam, and a bit of juice, can escape. 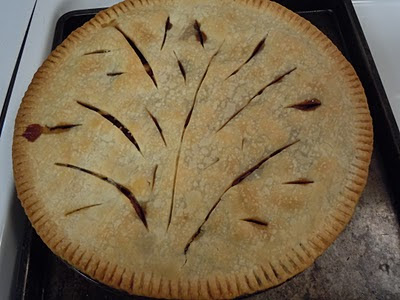 I had a tiny sliver of pie last night, which along with the sliver I ate at Thanksgiving constitute the only desserts I have eaten in almost two years.  They were both worth the wait!!

Merry Christmas to everyone -- may your goose be fat, your pudding full of plums and your mincemeat pies delicious, now and in the new year.
Posted by Kathleen Loomis at 10:51 AM