This has been the worst summer for fruits and vegetables in my memory.  Our zucchetta has produced four fruits, one of which ripened while we were gone on vacation and became an almost-inedible baseball bat.  Another was soft at the flower end and I had to cut off a third of it. 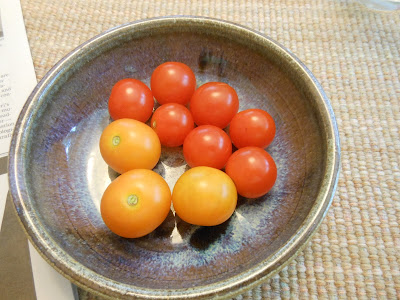 Here's approximately 50% of our entire tomato crop for the year.  They tasted great.

Not just our own crops have been disappointing, but also those from the market.  The watermelons have had seeds, true, but only one or two have tasted really wonderful. The tomatoes have been insipid, even the beautiful red ones from the farmer's market.  I've ended up roasting or pan-caramelizing more than we've eaten raw.  No juicy tomato sandwiches; no wonderful fresh-tomato pasta sauces.  Even the heirloom tomato salad at the pricy new restaurant was on the so-so side. 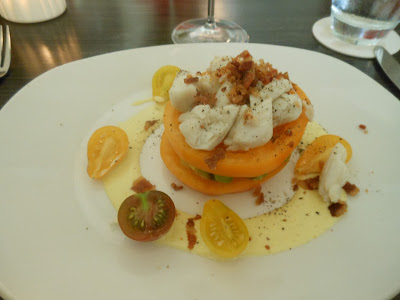 (that's crabmeat and bacon on top, lemon aioli on the plate; magnificent even with so-so tomatoes)

We've had some disappointing peaches on and off all summer, so much that I'm afraid to buy more than two or three at a time.  Last week we bought three.  The first one was magnificent -- the best I'd eaten all summer.  The second and the third were mediocre.

On the bright side, the corn has been superb all year.  I think they must have made some permanent breeding improvements in the last five years, because no matter where it comes from, the corn seems to be consistently excellent throughout the season.  Thank heaven something is turning out reliably delicious.

Posted by Kathleen Loomis at 6:32 PM