Ahead of the trend again

I had to take some food to a dinner this week so I made a big dish of carrot salad.  Practically everybody will eat it, and it sure brightens up your plate! 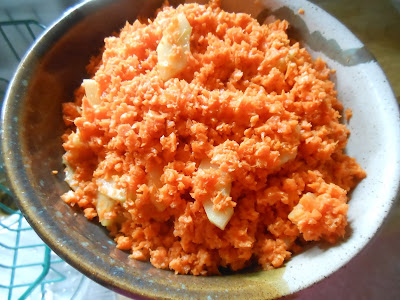 But when I arrived and announced what I had brought, I didn't say "carrot salad."  Following the lead of the New York Times, my infallible guide to what's hip and trendy, I called it "carrot tartare."

It seems that anything raw has become h and t.  As Mark Bittman explains in the article, "tuna tartare has far surpassed beef in popularity, lamb tartare is fashionable and carrot tartare is expensive."

Well, mine wasn't, but then I don't operate a restaurant in Brooklyn.

I make my carrot salad tartare with a lot of carrots, a few thin-sliced cucumbers, and a dressing made of equal parts olive oil, dijon mustard and lemon juice.  As has happened so many times in the past, I reflect that if you do your own thing for a long time, it will eventually become fashionable.

Posted by Kathleen Loomis at 9:11 PM