My husband came home from the farmer's market last week with a bunch of golden beets and I was thrilled.  They were absolutely beautiful -- warm red-orange on the outside, mottled gold on the inside.  I could hardly restrain my excitement as I scrubbed and sliced them. 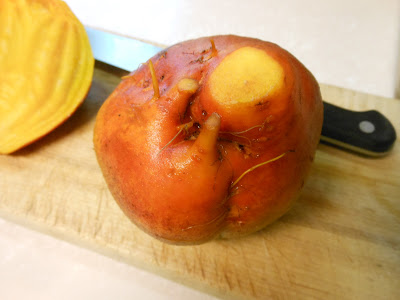 Decided to put them in the oven for roasting, and an hour or so later, when they seemed to be done, I was disappointed.  The surface that had been in contact with the olive-oil-coated pan was brown and appealing, but the surfaces left open in the oven had turned an unappetizing purplish-yellow. 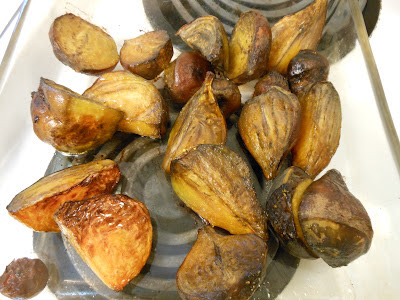 We ate them, of course, but they tasted almost exactly like plain old red beets, namely delicious.

A couple of days later I served up the leftovers cold, fixed with a mustard-olive oil-lemon juice dressing.  They were probably a little better in this incarnation than in their previous warm life.

This script has played out many times in my life -- I buy fresh beets, expecting them to turn out really special, and they turn out kind of normal.  Frankly, I've never noticed much qualitative difference between fresh roasted beets and beets straight from the can.  I love them both. 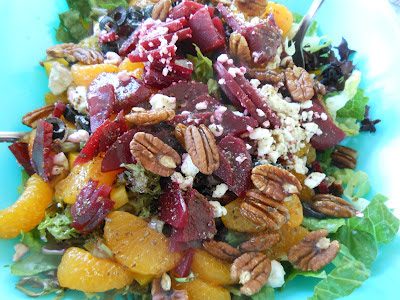 In fact, earlier this month my friend Alyce served a wonderful salad with beets as the featured ingredient.  After we had raved about it, she confessed that the beets were canned.  We all agreed that they were just fine.

Why do I keep buying the fresh varieties, spending time on preparation and roasting, when I could open a can in one minute and heat them up in three?  The mystique of the farmer's market, the seductive allure of fresh over processed, keeps winning out over the voice of experience.
Posted by Kathleen Loomis at 9:15 PM