I am deeply and permanently in debt to George Plager, the master photographer who has taken all my quilt photos for several years and gotten me into a lot of really good shows.  Periodically I try to make inadequate payments on that debt by taking him out to dinner.  But this last time around, instead of going to a nice restaurant he wanted me to make Hoppin John.

I learned about Hoppin John on one of our many trips to Charleston SC, and then found it in The Joy of Cooking and made it at home.  Although it's humble fare -- basically just beans and rice -- it's such a wonderful recipe that I have served it for many a party, delivered it as post-funeral fare to bereaved families, and whipped it up for our own suppers more times than I can count.

If you're unfamiliar with this great dish, follow along -- maybe you'll want to make it too.

Although you get only one pot dirty, this is a two-part recipe.  First you cook up a batch of beans (in this case, the good old Southern staple, black-eyed peas) with seasonings.  You decant them into a holding bowl, where they sit while you do Part Two: a batch of rice pilaf in the oven.  When the rice is done, you take the pot out of the oven, dump in the black-eyed peas, mix, and stick them back in the oven to get everything nice and hot.  That's it.

Part One:  You can cook up the black-eyed peas early in the afternoon of your dinner, or a day or two in advance.  Your first decision is what format to purchase your peas in.  You can buy them dried in a bag (that form takes a while longer to cook) or fresh in the produce department (but in my grocery, only around New Year's).  My preference is to buy them frozen in a bag.

Make a soup-like concoction with beans, diced onion, diced ham, dried thyme and water to cover, and cook it till the beans are as done as you like them, usually about a half hour if you start with fresh or frozen peas.  The proportions don't really matter -- heck, it's soup -- but I figure two big onions, 4 ounces or so of ham, and two 12-ounce bags of frozen beans.  Beans always need salt, but I like to use Penzey's Galena Street seasoning, which is salt plus some nice other spices and herbs.  Add plenty of thyme, maybe as much as a teaspoon, because that is the major flavoring agent in the recipe.  My recipe also calls for some red pepper flakes, but I usually omit them because the Galena Street has some heat to it. 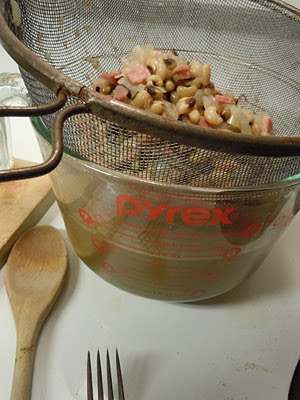 When the beans are done, pour them through a colander or sieve to separate out the liquid from the solids.  I usually save the liquids in a big Pyrex measuring cup, and stash the beans in a bowl.  If you're doing this the previous day, stick everything in the fridge. 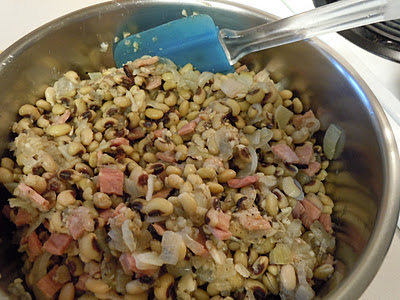 If you have used a dutch oven or cooking pot that can go into the oven, just rinse it out and use it for the second part of the recipe.  If you don't have an oven-proof pot, you'll still need to keep the stove-top pot for the first step of Part Two, then transfer the hot food to a baking dish.

Part Two:  This is the only time you need to measure, because you want the rice pilaf to come out fairly dry.  You'll need 1  1/2 cups of long-grain white rice, and 2  3/4 cups of the liquid you drained off your peas.  If you don't have enough liquid, add water or chicken broth to get to that quantity.

About an hour and a quarter before dinner, turn the oven to 325.  If the beans have been in the refrigerator, take them out and let them get to room temperature.

Put your pot back on the stove and cook some bacon that you have cut into small pieces.  I use about four ounces, but it doesn't really matter.  Get it brown and crispy over low heat, and then pull the bacon out and put it on a plate.  Keep the bacon fat in the pan. 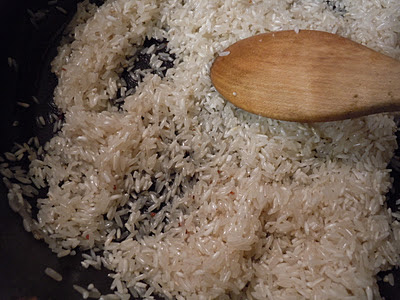 Put the rice in the pot with the bacon fat and cook it over high heat for a few minutes, stirring, to get every grain of rice coated with fat.  If there doesn't seem to be enough bacon fat, add a little butter or olive oil.  (Don't worry, there's no such thing as too much.)  Before the rice starts to brown, add the pea liquid.  Bring everything to a simmer, then cover the pot and put it in the oven.

Check the rice in 20-25 minutes; when the liquid has been absorbed and the rice is cooked through, take the pot out of the oven.  Add the beans and the bacon, stir, and put the pot back in the oven for five minutes or so till the beans get hot.  Then turn the oven off and let the food sit on residual heat for at least ten minutes and as much as a half hour.  Just before you serve, add a good amount of chopped parsley. 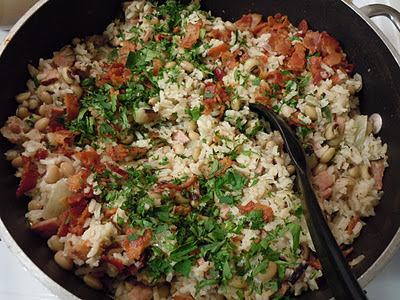 If you have pea liquid left over, not to worry.  Put it in the freezer till the next time you're making soup; it will serve as pre-seasoned stock with whatever kind of ingredients you choose.