One of the side benefits of getting old is the chance to complain about how things used to be so much better.  Fortunately (?) the subject of food presents many such opportunities.

I'm not talking about minor inconveniences such as favorite brands that disappear -- I'm talking tectonic shifts in food production and availability, and when they take away your beloved foods it's cause for mourning.

The first to come to my mind is the Northern Spy apple.  In the day, Spies were everywhere in upstate New York, a tart, firm apple with the best taste and texture I've ever known. And I'm not alone.  A brief Google search turned up this paean from Fred Lape, the director of an arboretum in New York, in 1973:  "As a standard of excellence by which to judge, I would set the Northern Spy as the best apple ever grown in the United States.  To bite into the tender flesh of a well-ripened Spy and have its juice ooze around the teeth and its rich tart flavor fill the mouth and its aroma rise up into the nostrils is one of the outstanding experiences of all fruit eating."  Yes!  Yes!  Fred!  Yes!

By 1973, however, the Spy was already getting hard to find. Wikipedia reports "it fell somewhat out of favor due to its dull coloration, irregular shape, tendency of the thin skin to allow bruising, and lack of disease resistance, specifically subject to bitter pit and blossom fireblight."  Well, that does make quite a list of handicaps, but then again it tastes great.   I chatted with an upstate NY apple grower last month at a farmer's market and asked whether Spies are all gone; he said some orchards still have a few trees but only for walk-up customers.  Supermarkets don't want them, dullness and irregularity being two qualities that trump great taste any day.

Then there's pork.  When I learned to cook as a teenager, porkchops were one of the favorite family meals and my mom's recipe was foolproof.  But as the years went by, I started to notice that the chops didn't turn out so good any more.  The fat was didn't melt right so the chops didn't brown.  The meat seized up and got tough instead of simmering to tender perfection.  The pig farms had bred all the good fat out of pork, called it "lean meat" and then because it was so dry and tasteless, shot it full of saline solution to make it "moist and tender."  I no longer buy pork at the supermarket, only at the specialty butcher where it's not really like the good old days but at least has no saline additives.

My latest endangered food is just now going over the cliff.  It's the watermelon, the good old-fashioned huge watermelon with seeds and all the flavor in the world.  Last year we were able to buy two seeded watermelons that sneaked into the supermarket by accident.  This year we have found none.  Instead we have seedless melons, because who could be bothered to spit out seeds, and though they still cost the same, they're small, because who could be bothered to eat the same dessert three nights in a row.

We've been avoiding these puny "personal melons" all year but finally found one that, while seedless, was at least big enough to make it worth the six bucks.  Yes, it takes up half the top shelf of the fridge, but isn't that part of the mystique of summer?  I must admit this is a pretty good imitation of a real watermelon, but I think they bred out some of the the flavor at the same time they bred out the seeds. 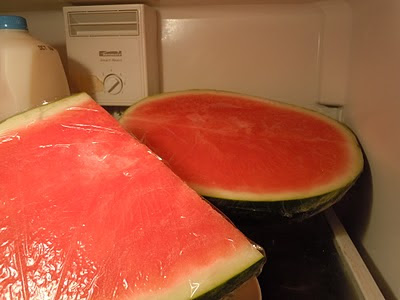 The good news is that a few people remember the way food used to be.  We have a resurgence in heirloom tomatoes, heirloom apples and heirloom pigs.  Of course they cost twice as much as the supermarket varieties and are hard to find.  How many years will we have to wait for the return of heirloom watermelons?
Posted by Kathleen Loomis at 10:25 PM