We had four or five tomato plants this summer, not that you would have noticed.  Between the deer, the groundhogs, the squirrels and god knows what else, maybe orangutans, we got nothing from our plants until a week ago.  A couple of tomatoes got to be fair-sized in August and even started to turn color, but were grabbed by the critters before we could pick them.   I don't think any of them ever got to be red.

Finally in mid-September the Roma started to have some fruit, and a week ago Ken decided he'd had it -- he picked what was on the plants, pulled them out and threw them out for the yard waste pickeup.

Here is 100% of our tomato crop for 2015, not occupying very much space on the kitchen table. 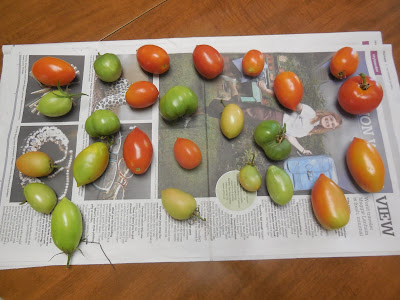 In the subsequent week, the green tomatoes turned red, one of the red ones went bad, and I decided it was high time to cook them up and be done with them.

Here's half of our tomato crop for 2015; the other half was on Ken's plate.  Puny and pathetic as they looked on the kitchen table, they did caramelize nicely and made a rich side for a particularly delicious trout. 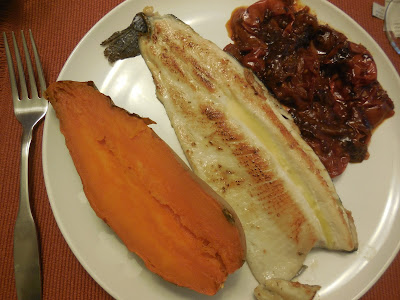 Hardly worth the trouble, wouldn't you say?  We've had bad tomato years in the past but nothing like this.  Next year we'll probably not even try.  An ignominious end to a decades-long tomato-growing career.