There are purists who say you should handle your sausages with kid gloves, making sure to never, never pierce the skin and let out the delicious fatty juices.  No doubt some of my good German grandparents and their siblings (that's 40 people, so you know at least one or two of them had to be pork purists) were among them.  But I'm not.

I am happy to eat sausages when they're really good, despite the calories and cholesterol, but I don't want to eat any more of the bad Cs than I have to.  So I always cook them in a pan of simmering water and prick the skins in several places so the excess fat can drain off.  Not that a really good sausage has a lot of excess fat, but I like to give it every chance for self-improvement.

We don't often find ourselves in the vicinity of a real German butcher, the closest of which is about 100 miles up the road in Jasper, Indiana, but when we do we stock up on bockwurst and knackwurst.  Recently a pack of knackwurst made it out of the freezer, and I was delighted to see the patterns that resulted as the skin cracked.  Another reason to prick your sausages! 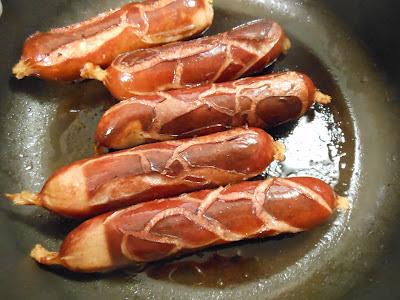 Of course, you have to have mashed potatoes and sauerkraut with your sausage.  I am a purist on that score. 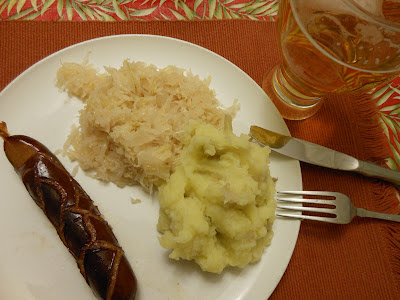 Don't you love tall food?  Here's the steak my husband ordered last night -- on top of the mashed potatoes, and the green beans, and topped with the onion straws!  It was a gorgeous presentation. 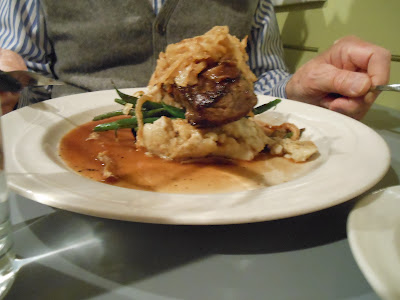 But then he took the steak off its tower and cut it open, and discovered that his "medium" beef was actually somewhere between "rare" and "medium rare," probably closer to the former than the latter.  He didn't send it back, because he was starving and wanted his dinner RIGHT NOW, but was disappointed.

Coincidentally, on Saturday I had gone out to lunch with several people and we all ordered the hamburger, which came highly recommended.  I ordered mine "medium well," which makes a lot of waiters and other foodies blanch.  But that's the way I like hamburger.  A healthy apprehension about e. coli plays a part here, but mostly it's just a question of taste.  I don't like juicy, I don't like pink, call me a philistine but I still like it medium well.

I have noticed that often chefs will try to punish me by delivering hamburger the way they like it, not the way I order it.  Sometimes I grin and bear it, but Saturday I sent mine back when the blood threatened to drown everything else on the plate.  As did another in my party, who had ordered "medium rare" and still found hers way too raw to eat.  Eventually both burgers found their way back to us, and we enjoyed our meals.

When we were getting our bills, the waiter announced that to express the kitchen's profuse apologies about getting our meat cooked wrong, they were going to give us our second beers free.  That was fine, except that neither of us who sent back our meals had ordered a second beer.

So a couple of the other people at the table, who had found their burgers perfectly OK, got free beers, and the aggrieved parties got an apology.  Sort of.  Thanks a lot.
Posted by Kathleen Loomis at 6:10 AM No comments:

More stuff from the market in Manaus, Brazil -- things you probably won't find in your local grocery.

Manioc root (the base for tapioca): 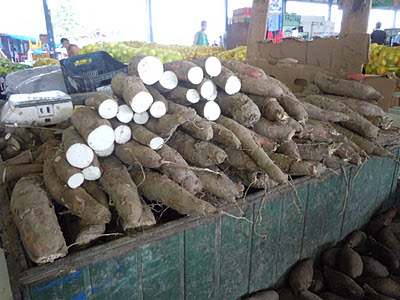 Quail eggs, the size of a walnut or smaller, a whole raft of them in a mesh bag: 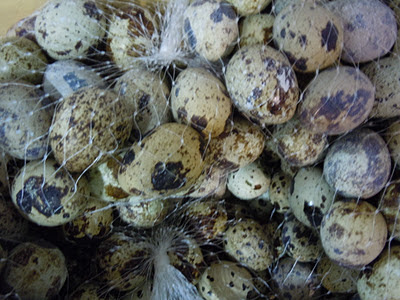 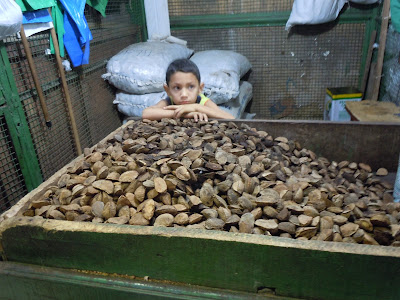 Some kind of big fat bean: 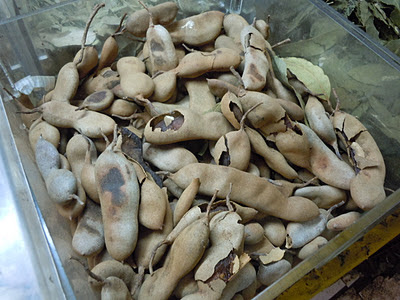 Not a clue on what this is: 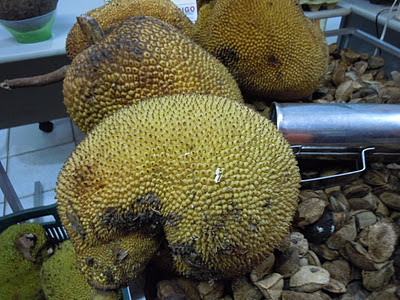 Or the knobbly green things in the background: 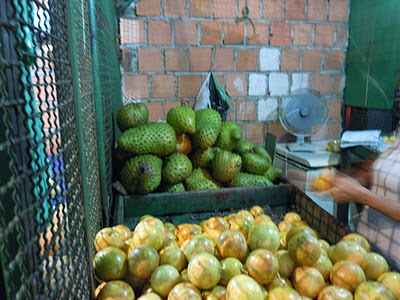 If you know what they are, please tell me!
Posted by Kathleen Loomis at 6:15 AM 4 comments: