Free fish -- and it's pretty good


We bought fish at the seafood counter the other day and the fish man asked us if we would like a free sample of a new product.  We chose the lemon pepper sauce and were handed a big foil package with a chunk of salmon inside, hidden under a slice of lemon. 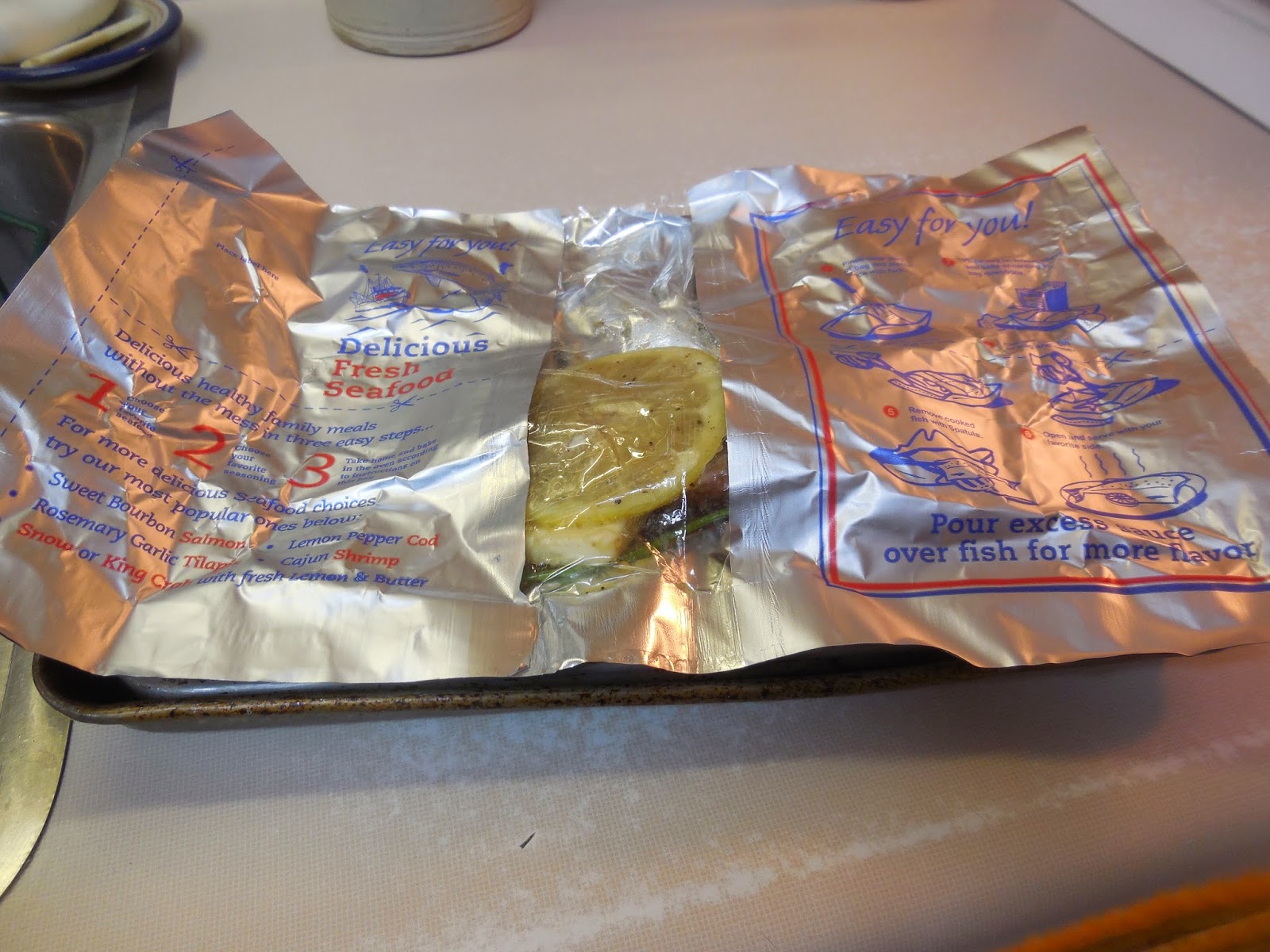 The directions were vague -- if it weighs between 4 and 8 ounces, bake it at 12 to 18 minutes.  I weighed it at between 6 and 7 ounces on my trusty kitchen scale. "Cooking time subject to weight and thickness of fish and are a guide only" the package said.  Since I couldn't see the fish I guessed and set the timer for 14 minutes.

I cut open the package and sliced the salmon fillet in two, and it was translucent pink and barely warm to the touch in the center.  Back in the oven for 4 more minutes.  By now my expectations were pretty low, but heck, it was free...

The package said that extra sauce should be poured over the fish after serving, but there was no extra sauce in this package, perhaps because it had evaporated during the 4 minutes of cooking after I opened it.  There was a bit of lemony goo on top of the fillet, and that slice of lemon that had been visible through the package window. 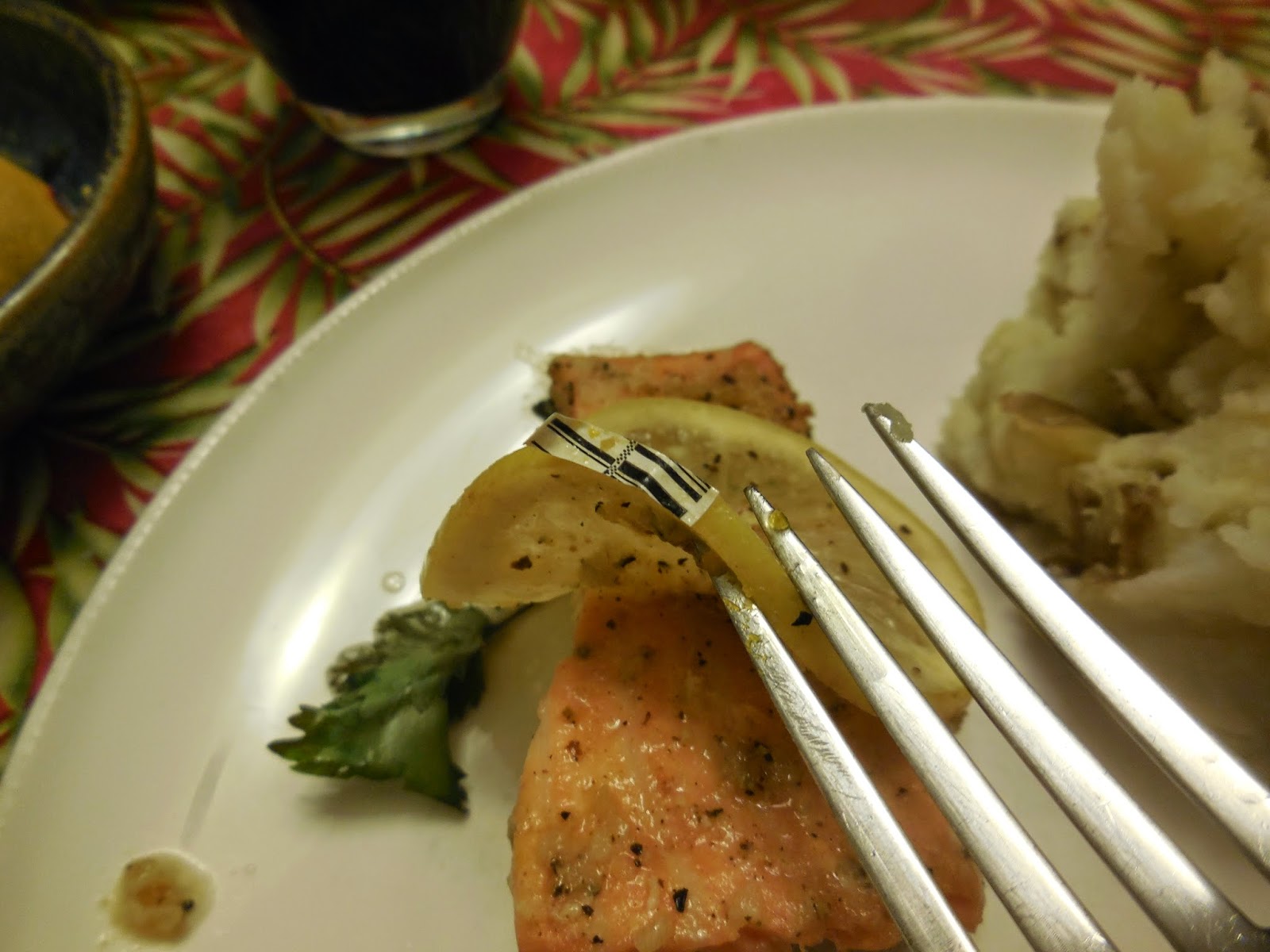 Oops -- somebody forgot to take the label off the lemon before slicing it.  My expectations sank a bit lower.

But to my amazement, the fish tasted quite nice.  The lemon pepper sauce was peppery but not too much, and unlike many supermarket marinades, which usually strike me as artificial-tasting, it was pleasant and did not overwhelm the fish.  The fish was done perfectly, despite my haphazard decision-making about cooking time.

Now, of course, you wait for the second shoe to drop.  In a couple of weeks the fish-in-a-package will be available for sale and we'll see how expensive it is.  Presumably the fish man will pick out your fillets from the case, put them in the foil bag, dump in a portion of sauce (the package listed sweet bourbon, rosemary garlic and cajun in addition to lemon pepper) and seal the bag for you to take home.  The package gives cooking directions (or should I say cooking hints, since they're so vague) for electric, gas and convection ovens.  No microwaves, of course, since the package is metal.

We'll have to decide whether we really want Chilean farmed salmon (which we usually avoid) at a high price (why do I assume the price will be high?) and whether the convenience is worth the markup (why do I assume there will be a markup?).  We'll have to decide whether the pleasant sauce will make us like fish varieties we ordinarily don't buy because they're too insipid.

I suspect we won't be getting the fish-in-a-bag very often, if at all, although it's certainly easier to pop the bag in the oven than to cook it myself on the top of the stove, and it creates way fewer dishes to wash.  But apparently Kroger thinks it's worth a shot, enough to give away a lot of free fish to try to get us hooked.


Posted by Kathleen Loomis at 9:29 PM No comments:


When you have a busy schedule, miss some meals and fix others under duress, it seems that vegetables are the first thing to be thrown off the sleigh.  And after several days go by, you just NEED a serious vegetable remediation.  I recall several times while traveling that we sought out Chinese restaurants because we knew we could get a whole plate full of vegetables, and you could practically feel the health returning to your innards with every bite.

The other night we had such a situation and as we entered our go-to Asian place we saw a daily special on the chalkboard: Chinese greens. 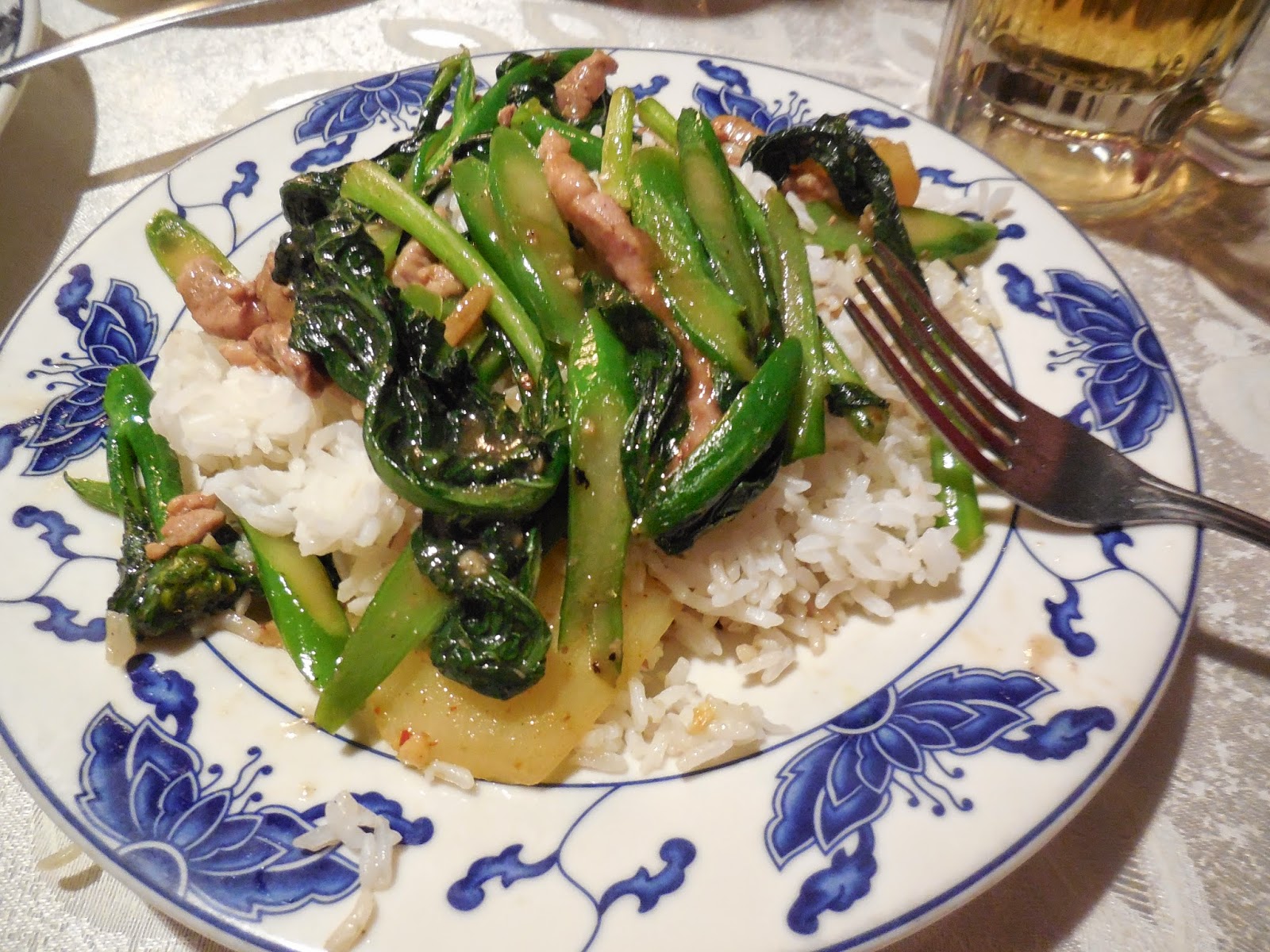 I don't know what kind of greens they were but they had deep green leaves and firm stalks slightly smaller than your little finger, fixed with pork, garlic and ginger.  I might have wished for some paler produce alongside, just for contrast, but I just filched some onions and water chestnuts from my husband's plate.

Now I wish this were on the menu all the time.

Posted by Kathleen Loomis at 11:30 PM No comments:

Good fortune in the new year


Tradition says that you should eat black-eyed peas on New Year's Day to ensure good luck and prosperity.  Nobody knows exactly where the custom came from but people have been eating humble foods for luck for millenia -- you'll find few superstitions involving caviar or prime rib.  Some people eat the peas with collard greens and cornbread, others with tomatoes, others in fancy-schmancy recipes with parmesan cheese and bruschetta, but when we eat black-eyed peas it's in Hoppin John, the favorite dish of Low Country South Carolina. 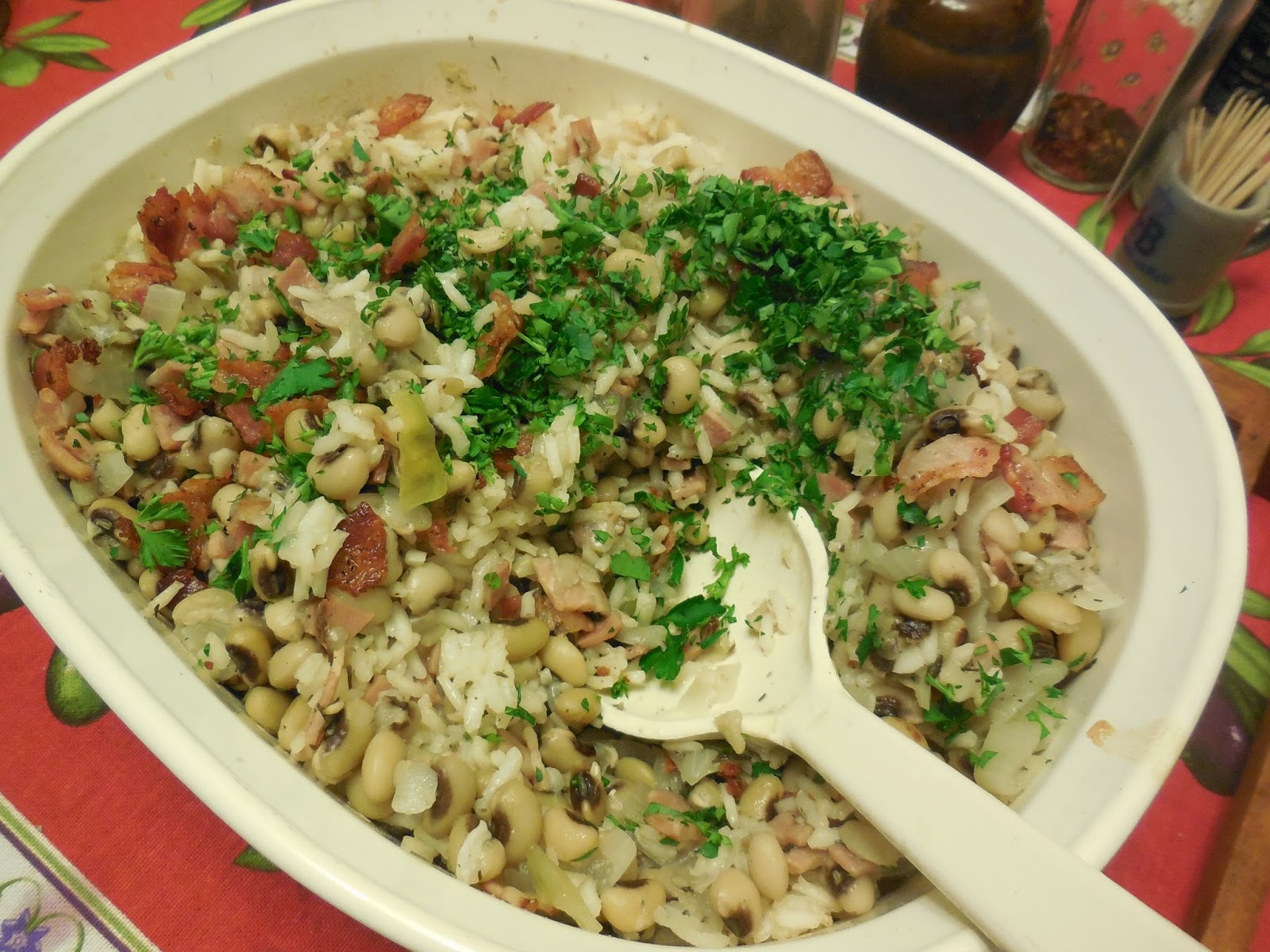 I wrote about it a couple of years ago if you want to check back and read how to make it.

Even if you missed doing this on January 1, there's still plenty of time to chow down and count your good fortune.  Happy new year!
Posted by Kathleen Loomis at 11:07 PM No comments: